1965 marked some big changes for me, and earning some money was not a bad idea at all. So I joined the bar trio of pianist Ludwig Ebert together with drummer Alwin Hildebrandt. We named ourselves after the solar system Alpha Centauri and toured the hotel and dance bars in the outskirts of Bielefeld.

I had been following the change to electric instruments for a while, so now there was the chance to convert. On 15 May 1965 I got my first electric bass, a Höfner, used, for DM 250. From Fritz Rost, who can best be characterised as the local equivalent to Jim Marshall, I got a wooden speaker box with a 12 inch loudspeaker that had an electric (!) magnet, not a permanent one. My first amplifier was a 35 Watt "Organist" from Radio-RIM in Munich. All worked quite well - loud enough for a bar trio. And the speaker box was just large enough to go on to the back seats of my 1959 Peugeot type 403. 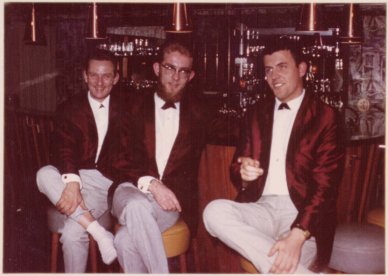 Don't ask me what "Fyler" was supposed to mean - just the name of a five piece dance band. For me it was an upgrade to the ranks of a "real" band, swingy, jazzy, but also very good at table music.

Walter Müller was a perfect clarinetist, trained by his father Walter Müller, at that time leader of the locally famous brass band Teutoburger Jäger. And Peter Ilskensmeier was a dream drummer for anybody who had ever heard jazz and swing. His hi-hat always moved at double speed for that extra kick. 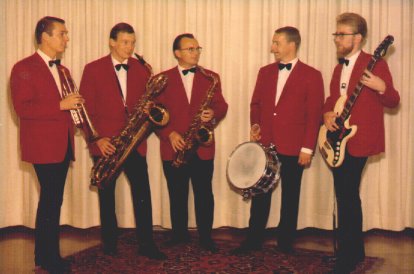 And this was the setting (from left):

Here together with Peter Ilskensmeier in the bar "Bei Jonathan". 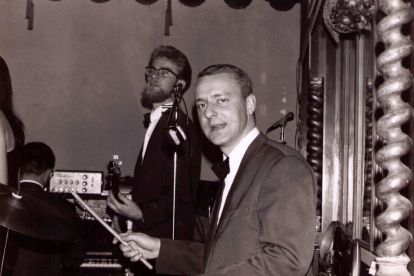 In 1968 I was finally cutting my last links to Bielefeld and moved fully to Hannover. Trumpeter Dieter Schön, who played in the Hannover Police Marching Band as well as in the Swing Big Bands we had at that time, hired me as bass player and took me on a 30 km ride to a small village east of Hannover right on the Autobahn: Sievershausen. Imagine, a small village with a few houses and one large hotel and restaurant (Hotel Fricke) with a large ballroom. Every Saturday evening we had a ball. And just watch the beautifully decorated stage!

Morinos, the name came from a famous accordeon of Hohner brand, the Morino IV. This was a top band of the time and good for the latest hits as well as for all-time standards.

I had meanwhile converted my equipment to a (at that time) giant 15 inch 100 watt loudspeaker from Isophon that had cost me DM 580, quite a sum. For the amplifier I changed from tubes to solid-state. At that time US company RCA was in the semiconductor business and offered proven basic designs together with a set of transistors. I took the 70 watt set and designed my own bass amplifier around it. I still have it, and it still works fine. 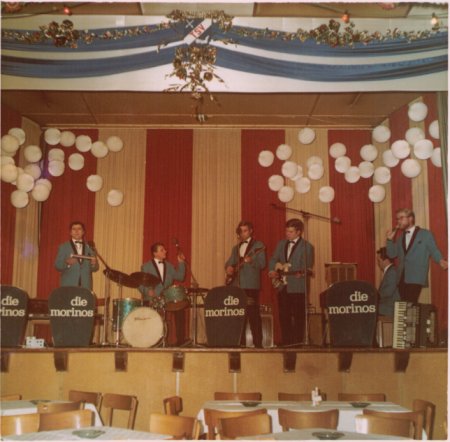