The Jazz Club in Hannover is known way beyond the Hannover region, renowned for its international connections. One of the main events is the annual open-air Jazz concert on Ascension Day. Mike Gehrke was first manager of the Jazz Club from 1968 - 2004, when he passed away much too early.

Naturally, Mike had very good contacts to all companies in Hannover and managed to raise funds for the Jazz Club. The big local travel travel company TUI at one time was looking for musical entertainment for their customers. What better than a Dixieland Band? Mike quickly put a team together from musicians he knew and that were available for travelling. That way the Salty Dogs were born. 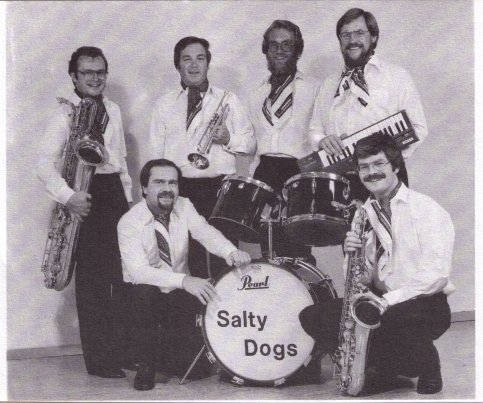 Here they are in 1986, posing on the top terrace of the Sheraton Hotel in Funchal, Madeira, with a view of the magnificent Reid's Palace Hotel in the background. You see Norbert Schulze-Ballenthin on trombone and Fred McMurray as guest on piano, who used to play piano with the Dutch Swing College Band. The guy in the red shirt is the singer, Mike Gehrke.

These are the travels the Salty Dogs have made:

During the first appearance at the Sheraton in Funchal, a one hour live broadcast "Tecido de Jazz" was made by Radio Funchal on 21 Nov 1985.