When I arrived in Hannover in autumn of 1964 I took with me contact information I had gathered in the Bielefeld Jazz Center Bunker Ulmenwall. So I nearly immediately went to rehearsals of the Jugendband Hannover, that had been founded in 1963 and was for many years to come led bei Heinz Both. Tuba player "Bratze" Lothar Alten had told me to come, and when I turned up with my tuba, he had a good reason to disappear. Well - it was not at all a bad choice. Here I met nearly all of the then important jazz and swing musicians of Hannover.

Here is the Jugendband ca. 1966, with brass, rhythm, sax, and clarinet section. And no - it's not me carrying one of the sousaphones. I was not in Hannover when that photo was taken, so my old schoolmate from Bielefeld and fellow engineering student Dieter Kleim just carried it instead of his baritone sax. 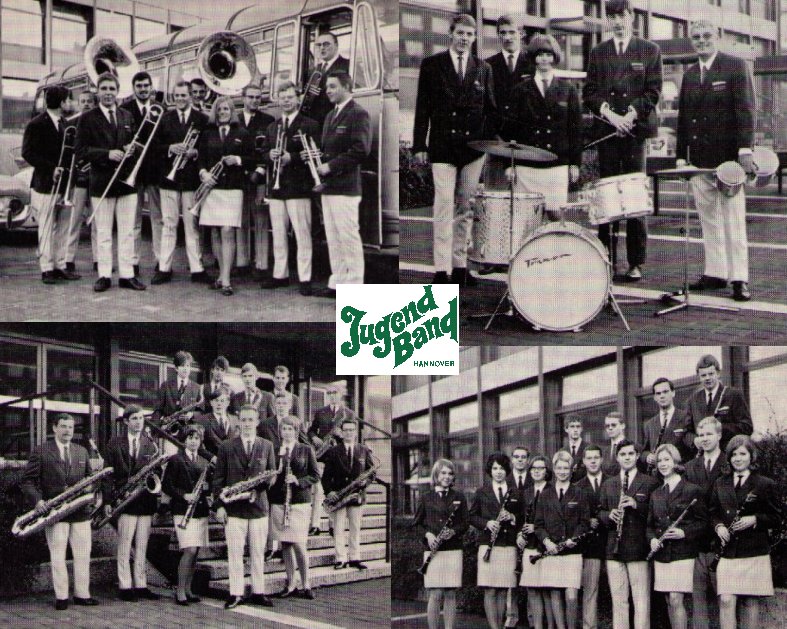 It must have been some time in 1966 when I joined this Big Band as bass player. It had been founded around 1960 and driving forces were trumpeters Dieter Schön and Klaus Meyer-Salzmann as well as alto sax player Wolgang Knopf.

Location for rehearsals was a room in one of the Hannover Police Barracks. Just imagine that time in Germany around 1966-1968, when students were protesting in the streets and police were holding them up with water guns. At the same time some hairy und beardy creatures with large cases were going in and out of the police barracks. How much can you stuff into a baritone sax case? Unbelieveable.

No more details and only a few photographs are left, these are from a ball in December 1964. Then at some time in 1969 it was time to move on towards Big Band 70. 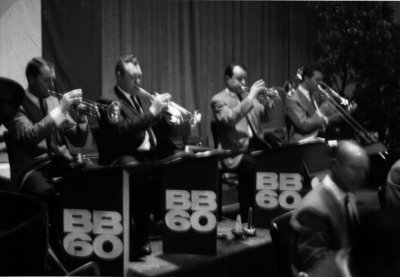 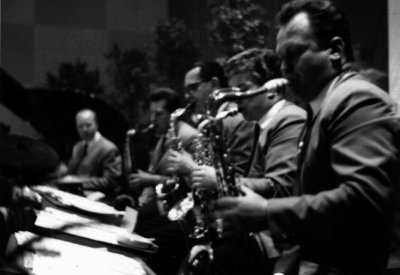 This band was quite successful and appeared for a number of concerts and on radio. It lastet until around 1978. Here you see them in the large auditorium of the local broadcast station NDR, at a rehearsal for a concert for the 25th anniversary of the German youth hostel organization. That concert was recorded and cut on LP disc.

In 1978 the lovers of Big Band sound among the musicians in Hannover were again re-shuffled. They joined forces and founded a further Big Band. This time Manfred "Manni" Krüger acted as leader and focal point. 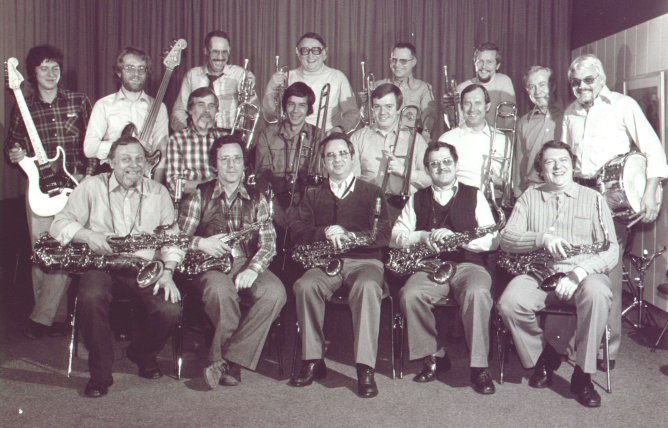 Towards the end of the 70s my engagement in music had become a bit too strong, so I had to worry a bit for my "real" job. Therefore I left Big Band Hannover. The band underwent several changes and existed well into the 90s, then under the leadership of Lothar Krist.