Everything started some time in 1960, when we put together a small dixieland band and practiced in a cellar in the center of Bielefeld. Whe nearly had everything we needed (we thought), except a trombone, which we replaced with a tenor sax. It was not much more than a typical school band and we had no occasions to show our talents.

Then one evening a strange but friendly guy appeared. He owned a small motorcycle, and even better, he had a trombone, was a bit older than we were, and he claimed to know all those things we didn't know. His name was Hans-Joachim Hillenkötter, nicknamed "Tötter", he owned a small cottage in the outskirts of Bielefeld, remote enough so we didn't spoil any neighbours with our music. He indeed did know a lot about Dixieland music, and that way the "Bourbon Street Paraders" were founded. A few weeks later they made their first appearence at the Bielefeld Bunker Ulmenwall, where they would be regularly heard in the years to come..

Here you can see them at the Jazz Club Minden, already with Alwin at the drums. 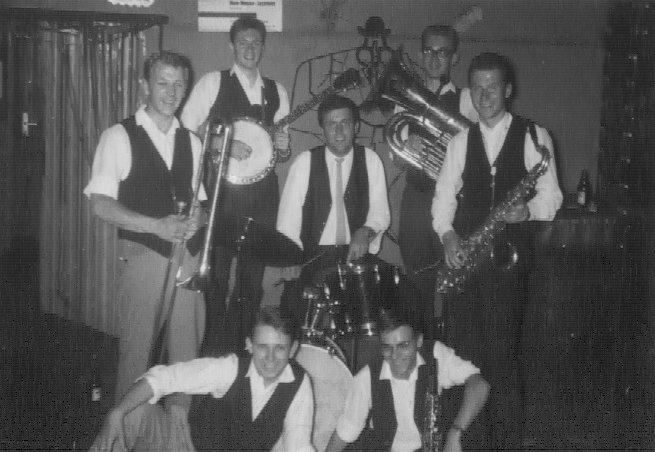 First line of names was:

(I had long forgotten about Klaus Reinhardt, our banjo-man, not even his first name did stay in my memory. Only recently I was informed that Klaus has been the well-known and respected street musician "Onkel Willi" in the city of Münster for several decades. My thanks go to Sarah Lieneke of LWL.)

It was a great time for Dixieland music. Everybody wanted it. That way we were in business right away and without much thinking. We covered the smaller towns and all the little villages around our home town Bielefeld, where some larger room was available. Advertising was done by linoleum carving and hand printing onto the back of unused wallpaper. A few of them picked to trees outside the villages was usually sufficient.

In the summer of 1962 we all (except Eckhard) went for holidays to a small camp ground in the Netherlands. At that time the island Overflakkee could only be reached by ferry. Despite of going together, we had decided to leave our instruments at home, because somehow we were fed-up with music. A few days after arrival we found life without music even more boring. So we scratched our money together and sent someone home for the instruments. It was rewarding in any way, because all the people on the island loved us and invited us to play. It was just great. Here you see the band actually playing on a sandbank off the beach, where we had to wade to. I nearly lost the mouthpiece of my tuba, it was pure luck that I was able to pick it out of that muddy salt water. 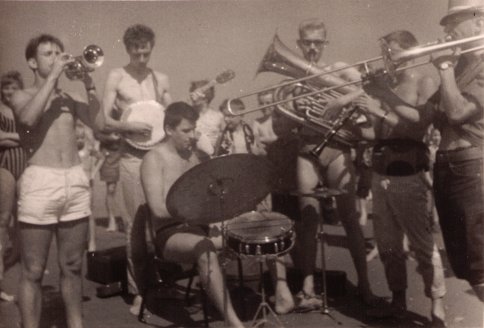 As time went on so did people. Tastes changed and in about 1964 I put away the tuba and got back to the double bass.

It must have been around 1964 that a renowned musician from US toured Germany: Trumpeter Nelson "Cadillac" Williams, who had played in the Duke Ellington Big Band and various other groups. One evening we had a gig in one of the jazz clubs when Nelson appeared and we had to accompany him. Seems we did a good job as everybody was happy, including Nelson and his German agent Rettig.

Of course, I have asked him about his nickname "Cadillac", and he told me this story:

"Duke Ellington was a very successful bandleader and he drove an appropriate car: a car of the Cadillac brand. He, Nelson, was jealous of it and at the next opportunity got himself a vehicle of the same make, only a used one and of course much cheaper. He then parked it challengingly next to the boss's car. And from that moment on Duke Ellington called him Cadillac."

A few weeks later one evening I went for a beer to the jazz-club in Spenge, a small town north of Bielefeld. That evening Nelson and his agent were there. The club had promised to get a band together to accompany him. But something went wrong and there was no band. When I entered the room, it only took seconds until Nelson spotted me. Couldn't I ...? Sure, yes, but who carries his bass around every evening? But, there was a double bass, owned by the club and standing in the corner. A horrible and gruel instrument with at least 10 cm distance between strings and fingerboard. No way out, within minutes the Nelson Williams - Ernst Schröder duo was formed and the gig started. I must have delivered a decent job, as in the end everybody was happy. Except my fingers, but at least that evening I was on free beer. 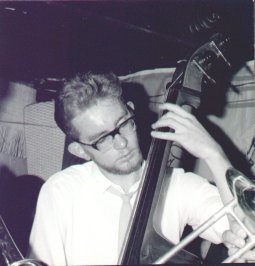 The Bourbon Street Paraders were still going strong (without much parading) with a few changes. Here are a few foto impressions ending with a Carneval ball at the Bielefeld "Gesellschaftshaus". Jürgen Dohse appeared on clarinet, Hans Berkau on trumpet, and the rhythm section had changed to piano, guitar, bass and drums. 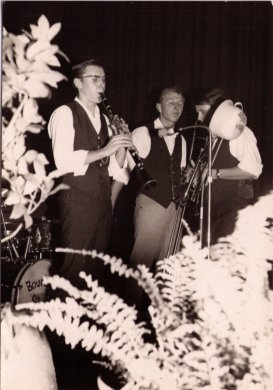 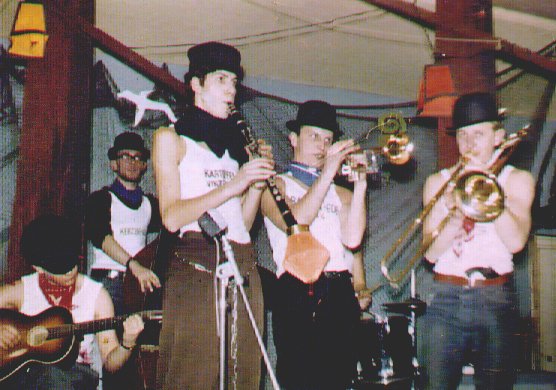 The year 1965 marked a number of changes. I went to university in Hannover and the rest of the gang went off in different directions. Some of them re-appeared with the quite successful German Rock band Creative Rock.