You can call me Ernst, Ernie, Ernest, Ernesto, just as you like. I'm an electronics engineer with a degree in communication electronics from the University of Hannover in Germany. Already for my diploma thesis I have worked in the field of audio data reduction for data transmission and storage, a field field that has grabbed me ever since. 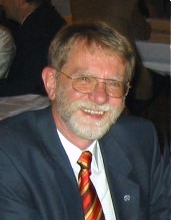 My PhD thesis elaborates on analog companders (or compandors). This is a technique for increasing the subjective signal-to-noise ratio for music signals on analog tape recorders. The «Dolby» switch on your cassette recorder puts such a system to work for you.

Since leaving university I have worked in many fields of communication technology. All started in 1970 with the PAL color TV system in the TELEFUNKEN basic research laboratory led by Professor Walter Bruch. The first development I was involved in, was the TED video disc system. This system used the so-called TRIPAL method to encode the colour TV signal. On this system I have written a description and evaluation (sorry, for the time being in German only).

Then I have elaborated on recording of audio signals on tape and discs, first with analog technolgy, and especially on companders. Some Hi-Fi enthusiasts probably still know the HIGH COM compander by Telefunken. After Ray Dolby had established companders for professional (Dolby-A) and home recording (Dolby-B), the basic idea for the TELEFUNKEN compander came from Jürgen Wermuth from Peine near Hannover. He developed this idea (against strong resistance from the management) into the professional telcom C4 compander. The development of the corresponding version for home recording (HIGH COM), lay over longer periods more or less only in my hands, from application of the initial idea to design and testing of the special analog integrated circuit, the U401B from TELEFUNKEN Semiconductors in Heilbronn.

There are still a lot of people who are working with Companders, but the supply of the corresponding hardware has become short. Therefore I have spent quite some time to develop sofware versions of some Companders. You can find them here.

Later digital technologies took over and digital audio became the main field of research. I have been active in the MPEG group from their early days on and under the leadership of Leonardo Chiariglione (yes, the Moving Picture Experts Group also talked and still talks about audio signals).

Everytime you listen to a program on DVD, to DirecTV (in US) or to ASTRA Digital Radio (in Europe), or when you download or listen to an mp3 file on the web, you make use of results from research work on the way humans perceive sound. This research work has been put to good use by those contributing to the MPEG group, a task in which I have been involved for a long time. For more details please have a look at the list of my publications.

And, by the way, didn't you always want to know the true story about the origins of mp3? Then take a look!

Until my retirement in 2005 I was responsible for digital audio in the research lab of one of the largest companies in the field of entertainment and consumer electronics: THOMSON, now under the name of Technicolor.