It certainly takes more than a few lines on a web page to tell you all about amateur radio, and you may not have much time. So, here is just a short summary, but if you are a radio amateur yourself, you may want to skip this part and immediately go to more technical details. You may also want to directly go to our Ham-Radio software download page:

Wireless communication started back in 1888, when Heinrich Hertz, a professor of physics at the Technical University of Karlsruhe, Germany, proved that certain waves travel through the air just like light, as had been predicted by James Clerk Maxwell. A short while later, in 1895, Guglielmo Marconi used this knowledge to actually transmit information from one place to another without any wires. First he did this in the garden of Villa Grifone near Bologna, Italy. Finally, on Thursday 12 December in 1901, he succeeded to span the atlantic ocean between Cornwall and Newfoundland. Being an experimenter, he truly was the first Radio Amateur. 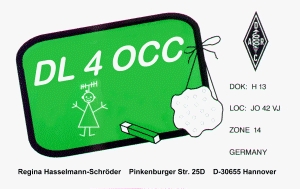 The commercialization of wireless took off, and today we all know how to use radio, television and cellular phones. But when wireless still was in its infancy, quite a number of aficionados jumped on the wagon, experimenting and building their own equipment. The saying goes, that the so-called short waves (the 2 to 30 MHz region) had been declared useless by the commercial wireless operators. Entirely wrong! Amateurs found out that indeed this region of the frequency spectrum can easily be used for world-wide wireless communication. On November 28 in 1923, radio amateurs succeeded in spanning the Atlantic ocean on short waves.

Commercial communication quickly got hold of that part of the electromagnetic spectrum, the amateurs were just lucky enough to keep some small parts of it for their own wireless experiments. And so they are still there, the amateurs, but today they need to be duly licensed by some government authority. As visible sign of passing an examination and being licensed, unique callsigns are issued, by which every single radio amateur can be identified world-wide. And so can we: Regina with callsign DL4OCC was licensed in 1992, while Ernst with callsign DJ7HS was already licensed back in 1962. Sometimes we can be found communicating on short waves in voice mode. But most of the time we can spare to spend on our hobby, we dedicate to working with Morse Code and to teaching it in our local Amateur Radio Club, which belongs to the DARC, the German Amateur Radio Club. 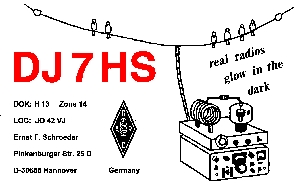 One word about the pictures you see above: Since the early days of amateur radio it is customary to send so-called QSL cards by mail, in order to confirm a wireless contact. These cards usually carry some nice drawings together with information about the contact and the equipment used. And people collect them. Obviously, the two cards you see above belong to Regina, DL4OCC and Ernst, DJ7HS.

Naturally, on SW we use SSB (J3E) and FM (F3E) on VHF/UHF, but our preferred mode of operation is CW, or more correctly A1A using international Morse code (or continental code as it is called in the USA).