The History of mp3

It was at the start of the eighties - the PC had just learned to walk and the Compact Disc, the new digital music carrier, had just been introduced - when a few researchers began to think about how those new digital sound signals could be "compressed". Their goal was to reduce efforts for storing and for wireless transmission of these signals, while at the same time keeping the high "digital" quality. Among these researchers were Detlef Krahé at the University of Duisburg, Karlheinz Brandenburg at the University of Erlangen and a group under Ernst F. Schroeder in the Thomson Corporate Research Labs in Hannover. At first they all worked separately and in competition, but contacts were established as early as in 1985; and when at the end of 1986 a European EUREKA (EU-147) research project on "Digital Audio Broadcasting" was started, all of them soon met in the same working group.

Two competing groups formed, the Fraunhofer IIS institute in Erlangen with the University of Erlangen, and Thomson Corporate Research with the University of Duisburg, and they developed competing systems. Work was hard, they tried to replicate the functions of the human ear, and with the then available computing technology the processing of three minutes of music could take a whole night. How should one check the results for lots of different kinds of music to ensure the required quality level? One song proved to be ideal: the original version of "Tom's Diner", sung a capella by Suzanne Vega. This was the most difficult song of them all and each involved engineer has listened to this song at least a thousand times.

Finally in 1988 it became feasible to build systems with real-time capability. This was the first chance to calm the persistent skeptics. In that same year an international standardization committee was formed, the "Moving Pictures Expert Group" or short MPEG. Its goal was to create an international standard for transmission and storage of digital audio and video signals.
The fourth meeting of that group was held in Hannover, jointly on the premises of Thomson and University of Hannover. That meeting was the first to have a separate working group on audio.

Meanwhile, further researchers had grabbed the concept of compressing audio and video signals. So finally 14 different proposals lay on the table.

Thereupon MPEG organized an elaborate comparison of proposals from which finally two favorites emerged: "MUSICAM", proposed by Philips, CCETT and the institute for broadcast technology in Munich (IRT) as well as "ASPEC", proposed by Fraunhofer IIS, Thomson, the University of Duisburg, and by AT&T. After further elaborate comparisons and tests, carried out by Swedish Broadcasting in Stockholm, the final outcome was extremely tight. The small differences in performance were more related to different views of requirements then to fundamental differences.

So all involved parties came together in a "historic" meeting in September 1990 in Murray Hill in New Jersey and agreed to unite both solutions and to create a single standard with different flavors.

The so-called "Layer 2" is one part of the standard that soon made its career with the European broadcasters, while the part called "Layer 3", that traces back to the works of Krahé, Brandenburg and Schroeder, was used in applications calling for higher compression.

Music in the "Layer 3" format is about eleven times more compact than music in the CD format, so that a memory chip with 256 Megabyte can now carry over 88 songs instead of only 8.

Meanwhile, we have reached 1995 and the PC has turned into a universal tool on which files are named with a dot and three characters at the end. Unfortunately nobody recorded it, but someone at the Fraunhofer Institute in Erlangen found a much shorter naming convention for the "MPEG Layer 3" files on his PC: he named them with ".mp3". That was the birth of a legendary success story, carried forth by the just awakening internet. The first integrated circuits with mp3 decoders became available in 1996 and the first portable mp3 players appeared on the market in 1997.

The rest of the story should still be known. It is estimated, that several hundred millions of mp3 decoders have been produced so far, and that practically every digital piece of music has once been converted into the mp3 format. 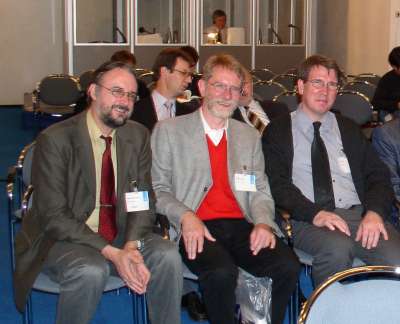 Here you have them sitting together at the 2002 German Sound Engineering Convention (Tonmeistertagung) in Hannover. From left:
Karlheinz Brandenburg,
Ernst F. Schroeder,
Detlef Krahé.

URL of this page: http://www.ernstschroeder.de/mp3.htm
For any questions concerning this page please contact me via EMail.
Copyright © Ernst F. Schroeder, all rights reserved.